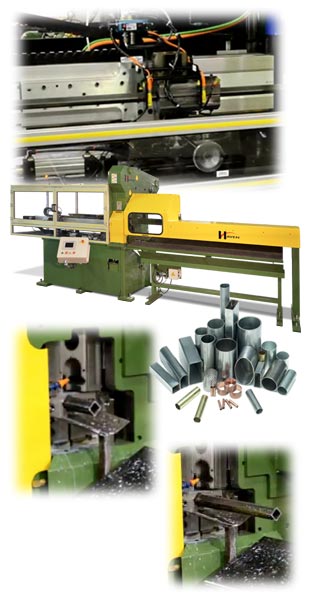 Brunswick, GA – July 11, 2013 -According to a recent academic paper, titled “The China Toll”, the United States lost more than 2.7 million jobs to China in the years between 2001 and 2011. Haven Manufacturing, the well-known Georgia based manufacturer of machinery and equipment for tube and bar processing, is doing their part to fight the trend of continued American job and manufacturing loss to Asia.

In 2013 Oddello Industries, a Tennessee based manufacturer of high quality metal, tube, pipe, composite, and MDF components for OEMs in a variety of industries, purchased a dual-blade cutoff machine from Haven as part of the development of a process to manufacture several individual parts from 1” square tube to be packaged, along with a variety of sheet-metal stampings, into high quality adjustable mattress foundations. The state of Tennessee alone has lost well over 56,000 manufacturing jobs, more than 2% of the state’s total employment, to China based companies in the past decade. Oddello, by partnering with proven America based equipment suppliers like Haven Manufacturing, has shown itself to be able to compete for, and win, business back from China based manufacturing concerns. Oddello’s capable engineering staff partnered with Haven’s engineers to develop a fully programmable process which couples a piercer, designed and manufactured by Criterion Machinery, with a Haven Servo Dual-Blade Shear Cutoff machine. The resulting process has proven able to process nearly 15 miles of tube per day into 38 unique parts (SKUs) within length tolerances that never exceed 0.0015 inch.

The Oddello-Haven collaboration has proven so successful that Oddello’s management recently decided to expand the tube stamping and cutting operation. Not only is this great news for the company and its employees, but it is great news for the people and community of Morristown. The additional jobs and income provided by the expansion will undoubtedly improve the quality of life for many people in the region. The original Haven cut-off machine has proven so reliable and efficient that the company has ordered an additional Haven Model 873 Servo Dual-Blade Shear Tube Recut Machine to handle increased demand from both new customers and the customer for which this process was originally designed. The Haven 873 is capable of cutting tube from square or round stock, in lengths from 2” up to 120” and employs a programmable closed-loop servo drive to assure accuracy.

Haven customers have learned to expect the same robust steel construction, ease of operation and quick-change features that Haven has become well known for in their entire line of cutoff machines. For more info.

If the fabricator is working with a single tube length, the material handling system is usually much simpler than when working with multiple length tubes. The tube bundle, as packaged from the raw material supplier, is placed in a loading device, usually a nylon belt or sling which allows the tubes to flow freely within the cradle. The bundle is raised on one side to align the tubes with an inclined magazine table, which allows one tube at a time to gravity feed in single row orientation into the ready position and to be fed into the cut-off apparatus. The tube will be moved forward by the machine until it hits the tube stop, which has been pre-set to the desired cut length. Contact with the tube-stop triggers the cut-off machine to engage the shear or saw blade which will make the precise cut, in the precise length, required by the process. At this stage the cut tube is conveyed out of the cut position to a collection point and ready to move to the next step of the process, at which point another tube moves into the cut-off position and the process is repeated as necessary.